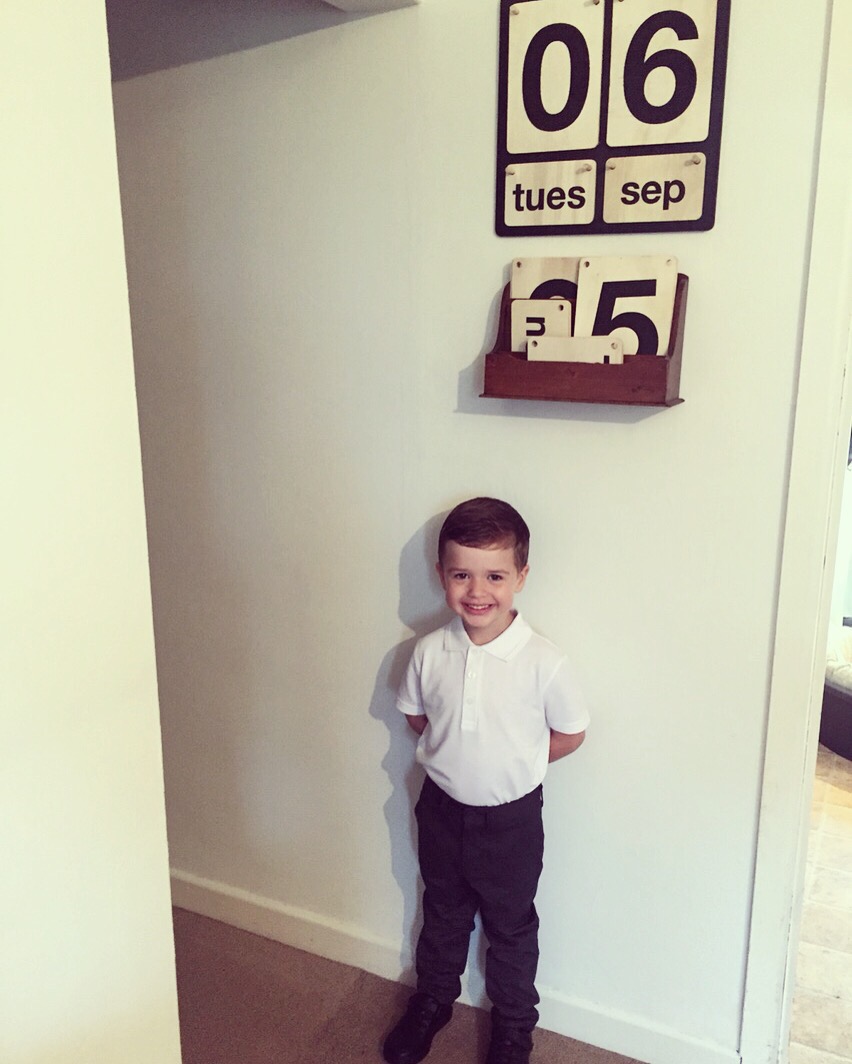 Having two boys 20 months apart is hard. Yes I know I am lucky and blah blah but I didn’t really have time to enjoy having one before another was in my arms.

Boys are hyperactive and sometimes it’s like having two miniature Hulk Hogans (I don’t know any other wrestlers), so having that halved is a weight lifted. The school holidays were tough, but also memorable.

It has however, only just dawned on me that he will now be at school for most of the week until he is 16, I haven’t prepared myself for that. Now I’m thinking he’s too little to go. What if he needs a poo? Can he get himself fully dressed for P.E? Is he eating enough? The anxiety is taking over!

I feel guilty for having fun days out with my two year old Mack, and telling Rex about them knowing he has missed out. I’m lucky because he does love school (so far) but I still feel the mum guilt.

Rex is really confident and he walked in with pride on his first day. I noticed on Monday he rocked up through the school gates, smiling at every child he recognised in an attempt to get some conversation out of them, only to be shunned. It broke my heart to see it, but I also understand that not every child is as confident as Rex.

Because I’m normally unorganised and ALWAYS LATE, the anticipation of getting ready for school and out of the door by 8:30am everyday was overwhelming. The first week I had 5 shirts, 3 pairs of trousers, and 3 jumpers all ironed and ready to go. Ironing is not my thing and is something I try to avoid if I can. I usually get creases out using my hairdryer or GHD’s (try it, it works!) and I even put watered down fabric softener in the iron, thinking I’d created a dragons den-esq way to make clothes smell nice! I was wrong, now every time I iron it gives off what I can only describe as a medicated aroma (yeah, don’t try that one!) This week however, I’m rush ironing in the morning and not half as organised! I knew it wouldn’t last! Haven’t been late yet though and had to make up some extravagant lie about the donkey escaping from the garden (we haven’t got a donkey) so in my eyes, that’s winning in itself!

Rex starting school has brought back so many memories for me. Arts and crafts, orienteering, Christmas plays and even the girl that smelt like TCP that I seemed to get lumbered next to in assembly every day (maybe her mum put lenor in their iron too.) Looking back though, I absolutely loved infant and junior school, so I’m hoping Rex will too.

After reading things online I was a bit worried about the judgemental mums that you hear about. I don’t really know anyone in our village so I’m a bit of a loner in the playground. Thank god I have a two year old to talk to. I’m cool with that though, there are other loner mums, and maybe by next year we’ll be in a gang and there will be new loner mums stood there talking to their toddlers! And if you haven’t got a toddler, there’s always your phone. Just refresh your Instagram feed every two seconds until someone makes conversation with you.

One thing I have noticed though, is the attitude and tears when I pick him up! I’m putting it down to tiredness and my endless questions about his day that I never get answers to. First rule of infant school is ‘you never talk about infant school’ 🙄

Has your child just started school? Or are they at school and can you relate to this? Let me know how you’re getting on.

How to create a …

How to tile using …

My stencilled patio a …