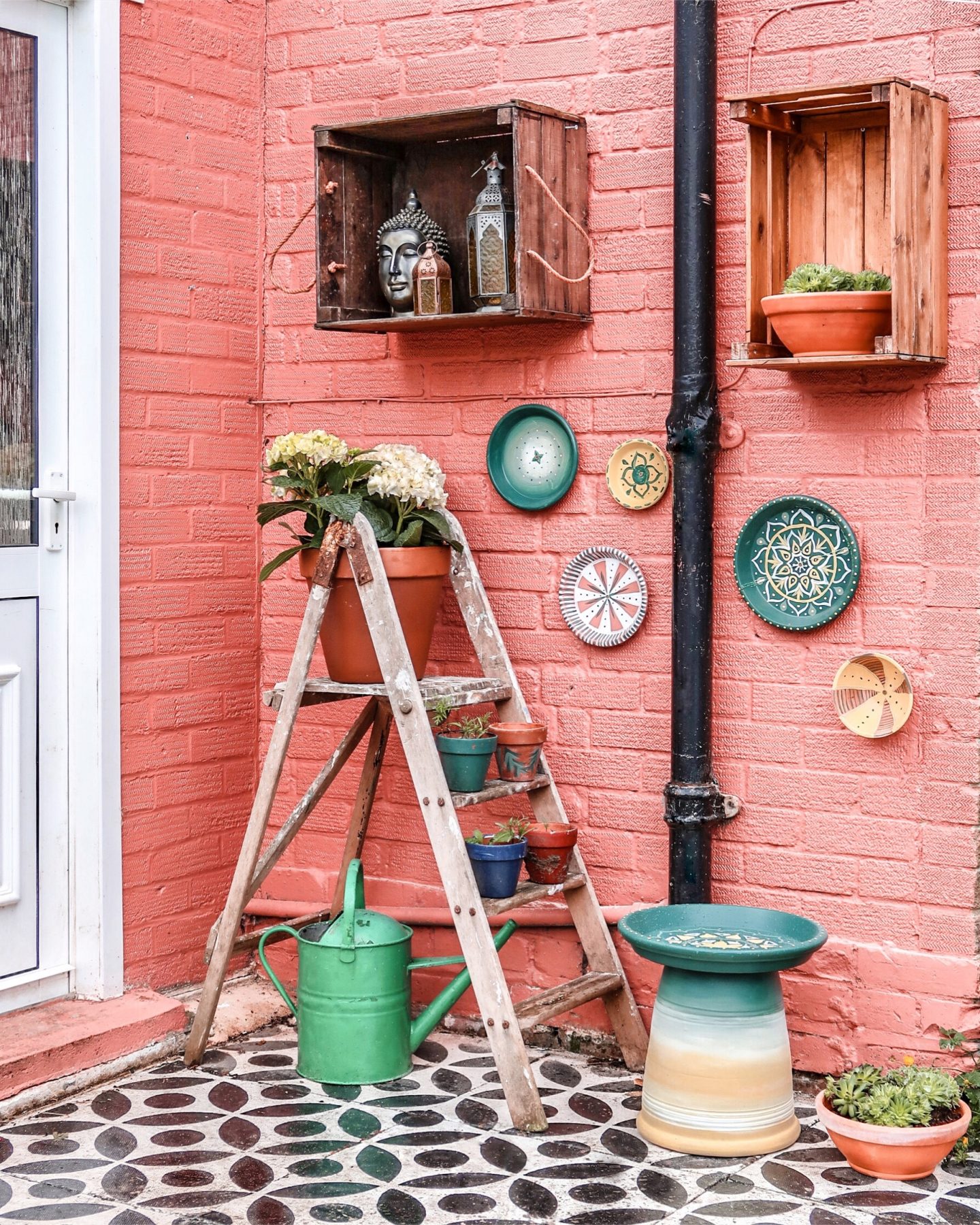 My DIY garden wall plates were another project of mine that was popular over on Instagram so I thought I’d pop a tutorial on in case you missed it or would like it for reference.

This is a really simple DIY but I thought it would be a great place to share what I learnt along the way.

In my opinion there are not nearly enough waterproof garden wall art options around that aren’t made of metal so with that HUGE gap in the market decided to look at making my own.

Terracotta is a traditional material that withstands multiple kinds of weather, not to mention it’s cheap as chips so it made sense to explore that idea.

Whilst browsing my local garden centre, looking for saucers to make my DIY outdoor table/water features (you can find that tutorial HERE) I noticed there were quite a few sizes, so I grabbed a variety and bought them.

My main concern was coming up with a rain proof idea for hanging them on the wall, as I know you can get self adhesive discs to hang plates inside but worried that once moisture got behind them, they would eventually become unstuck and fall down and break. Thats when I decided to try and drill a hole in to the middle.

First, I dampened the area that I wanted to drill and then I used a really fine drill bit to make a hole. I actually drilled from front to back because if the terracotta crumbled it wouldn’t be visible. Once I’d drilled all the way through I used a slightly bigger drill bit to make hole large enough for a screw.

Next up was the fun part, the painting! I didn’t really have an idea in my head of what I wanted to do so I decided to just make it up as I went along. You can however find LOADS of decorative plate or pattern inspiration on Pinterest.

I used Cuprinol (affiliate link) to paint the plates but you could use any paint suitable for outside. I find painting terracotta really therapeutic and highly recommend it.

Once I’d finished painting, I decided on the positioning of the plates and then drilled holes in to the wall. This is easiest through the pointing rather than the actual brick. I then inserted a rawl plug and screwed the plate to the wall.

Sadly, the first one I screwed to the wall broke because the drill was going too fast, so that was a lesson learnt! I managed to glue it back together though, so all wasn’t lost.

I’m so happy with how they have turned out and think they add a lot of interest to this area of the garden now.

As an added note, you could use plastic saucers (affiliate link) if you can’t find terracotta, as once painted, you wouldn’t be able to tell the difference.

I hope this DIY garden wall plate project has inspired you to try making your own DIY outdoor wall plates.

How to up-cycle your …

How to tile using …