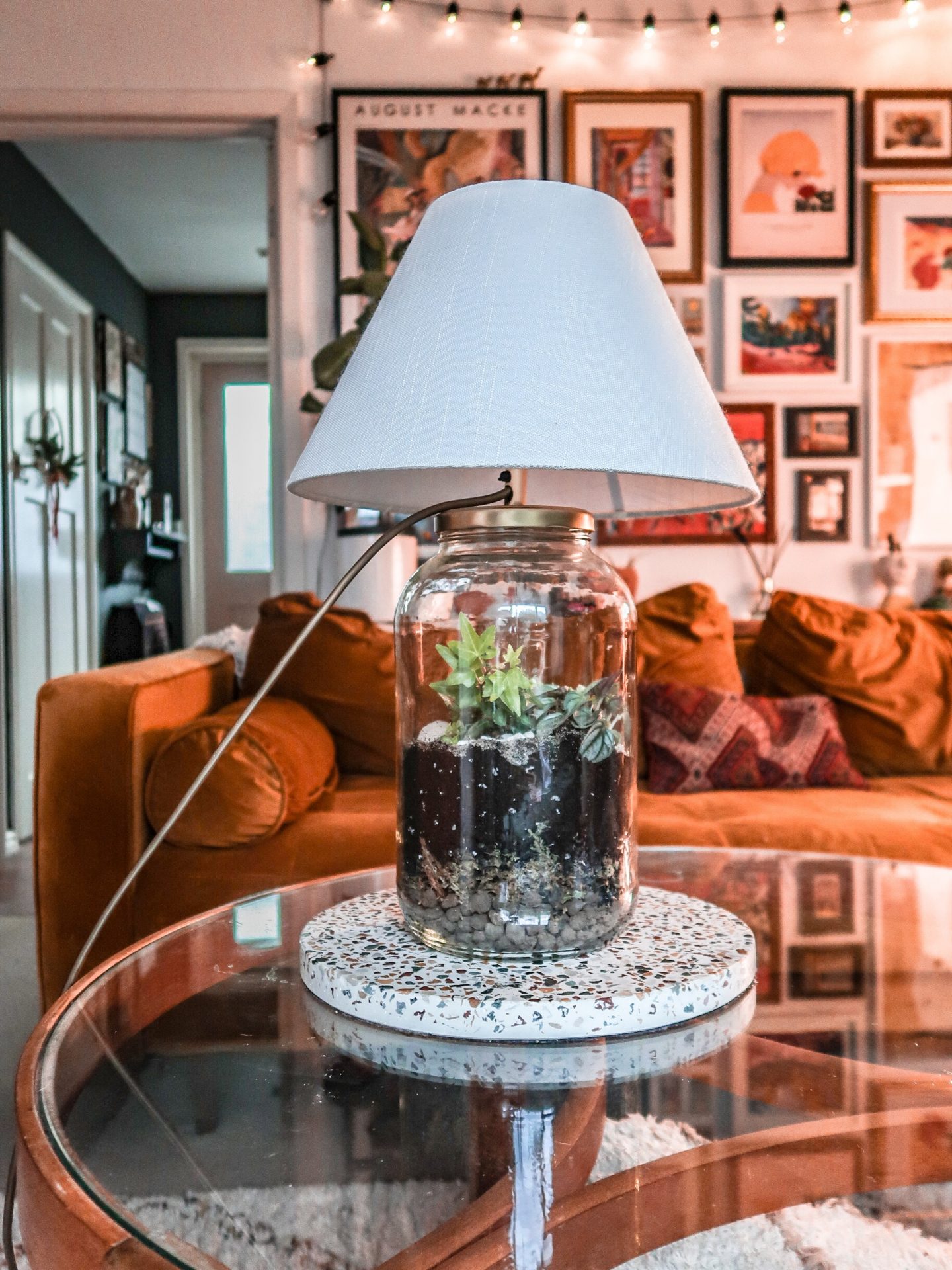 The idea for this DIY terrarium lamp came about after I saw one for sale in my local garden centre for £80.

Me being me, thought I can make that for less… so here we are!

I actually began sourcing stuff for this months ago but struggled to find certain things so it prolonged it a bit and I ended up buying things that turned out not to work like a jar with a thick cork lid and a lamp kit that required skills way beyond mine, so the good thing for you is that I’ve already made the mistakes to avoid you making them! You’re welcome! 😉

After those initial mistakes had been made I went on the hunt for a large glass jar with a metal lid. The reason it needs to be metal is because it’s thinner than the ones with cork and most lamp kits are made for jars. I ended up buying this 1 gallon jar from Amazon for £18. You could probably find cheaper ones if you look or alternatively you could make a smaller lamp using a smaller jar.

Next up, I searched for a DIY lamp kit that was simple to install, which I found for £17.99 from Lamp Spares. The great thing about this lamp kit is that the cable comes out of the top so you don’t have to drill any holes in the jar, plus the plug comes already wired.

I looked around my local garden centre for the stuff to go inside the terrarium but actually discovered that it would cost a fair bit to buy it all separately, plus I would have a lot of soil etc left over. I turned to the internet and ended up finding a DIY Terrarium kit on Etsy. The kits come in an array of sizes depending on how big you want your terrarium to be and start at £15.90. I bought the large kit for around £25 but I probably could have gotten away with the Medium one.

Next up were plants which were actually really hard to come by. If you already have a closed terrarium at home or know someone that does I’d highly recommend using some cuttings from that. I found a plant supplier online and paid £15 for 3 different types of plants, plus another one from my garden centre. My total spend on plants was £20.

Ok, time for the fun part… creating my terrarium.

First I popped some clay pebbles in, this helps create drainage.

Next up, I scattered the sphagnum moss and then sprinkled some charcoal on top to prevent mould and bacteria build up.

I then popped the soil in. In my kit were two clear bags of soil but I only used one of them.

Once the soil was in, I used a piece of cork on a stick which was included in the kit to move it around and position my plants.

Yay it’s looking good! Now that the plants have been added, all that’s left is some sand and decorative stones. You can of course add anything else you’d like in order to personalise your terrarium.

Next up, the tricky bit…adding the lamp.

First thing I did was drill a hole in the top of the metal jar lid which was simple enough.

As mentioned I’ve never wired anything up before but with the help of my husbands very basic electrical knowledge, I managed to wire up the parts by myself and did a little happy dance when I saw the bulb illuminate.

As I’m such a novice when it comes to electrical, I’ll hold off giving any advice on that subject and just suggest that you follow the suppliers instructions or seek a professional to help.

Last but not least, I added a lampshade that I already had, so technically that bit didn’t really cost me anything. I might swap it for a more jazzy design at some point though.

So here it is, the finished lamp! I’m so so so happy with it.

The total cost was actually £81, but the satisfaction of making it myself was so worth that! To make it cheaper, I could have bought a terrarium already made which I saw in Dobbies for £35 plus the lighting kit for £18 but for the purpose of this post I wanted to make it from scratch.

I hope you enjoyed this tutorial, I’d love to know what you think and if you’re going to give it a try.

Until next time, Hayley.

How to up-cycle your …